KHATMANDU, Feb. 6, 2021:Home Minister Ram Bahadur Thapa was deputy to Pushpa Kamal Dahal when he led the decade-long armed conflict launched in 1996 to abolish monarchy. On Friday, Thapa, standing on a stage set up at the main entrance to Narayanhiti Palace, the seat of Nepal’s Shah monarchs and where the last Shah king, Gyanendra, announced his departure in 2008, challenged his former chief Dahal. “If anyone tries any reckless effort to carry out the ‘non-vegetarian’ agitation, that person will be locked inside the zoo,” the usually taciturn Thapa thundered in front of thousands. “Our law and constitution consider such ‘non-vegetarian’ agitation a crime.”

Thapa was referring to Dahal’s words. Some days back, Dahal had said at a public function that there was a need to change the style of ongoing agitation against the House dissolution from “vegetarian” to “non-vegetarian”, meaning that the leaders and cadres of his faction of the Nepal Communist Party must be more aggressive and violent on the streets so that the government will respond to them. After Prime Minister KP Sharma Oli dissolved the House of Representatives on December 20, the Nepal Communist Party has split into two—one led by Oli and the other by Dahal and Madhav Kumar Nepal.

Despite efforts by Dahal to bring his former comrade-in-arms Thapa into his fold, the latter chose to side with Oli keeping his home minister’s chair intact. The two factions have been at each other’s throats since the dissolution of House. Being the powerful home minister with the Nepal Police and the Armed Police Force under his command, Thapa can afford to threaten Dahal with the might of the state. Besides, Thapa has now become a trusted lieutenant of Oli, who seems to be acting as if he is the state, threatening the judiciary, filling the constitutional bodies that are supposed to keep a check on the functioning of the government with his henchmen and making a mockery of the constitution.

Thapa, on his part, has also been trying to foil the agitation of the Dahal-Nepal faction, according to leaders of the faction. “We have reports about his instructions to security agencies to foil our agitation, his directives to take stern action against our movement and our cadres,” a Standing Committee member of the Dahal-led faction said. Now that he is in the Oli camp, Thapa as the home minister had a role to play to bring supporters from different parts of the country to Friday’s mass gathering of the faction. According to a senior Home Ministry official, Thapa had also instructed security agencies to facilitate people coming from outside Kathmandu on Thursday despite the nationwide strike called by the Dahal-Nepal faction to protest the 32 appointments in 11 constitutional bodies on Wednesday.

If Thapa seems to have a point to prove to Dahal, he also seems to have a point to prove to Oli that he deserves to be his deputy. He is now playing a role to bring about a tie-up between Prime Minister Oli and some former Maoist combatants in order to bring them into their fold by making some commitments to the former fighters of the armed conflict. Thapa is also trying to revive the Young Communist League, a controversial youth organisation of the dissolved CPN (Maoist) formed after the Maoists signed a peace deal in 2006. After the merger between CPN (Maoist-Centre) and CPN-UML in May, 2018 to form the Nepal Communist Party (NCP), the Young Communist League was merged with Yuwa Sangh Nepal, a youth organisation of the UML to form Rastriya Yuwa Sangh Nepal.

But with Nepal Communist Party vertically divided, its sister organisations too have been divided with Ram Prasad Sapkota, chair of the Rastriya Yuwa Sangh Nepal joining the Dahal-Nepal camp. Thapa, therefore, is trying to revive the Young Communist League under the leadership of Biru Tamang, a former league leader. A 99-member central committee of the Young Communist League was formed in the last week of January. A central committee member of the Oli faction said that Thapa is trying to show his own strength inside the faction to increase his clout. “That is why Tamang-led youths held a separate motorcycle rally in Kathmandu on Thursday,” the leader said on condition of anonymity.

Before Friday’s protest, Thapa had instructed his own district leaders and cadres of Bagmati Province to bring the maximum number of people to Friday’s mass gathering, the leader of the Oli faction said. While Thapa may be trying to cozy up to Oli and create his own base within the faction as is natural in political games, what surprised many was Thapa’s announcement on Friday of the “third people’s movement”, despite being part of the government. The people’s movement of 1990, led by the Nepali Congress and the United Left Front, an alliance of seven left parties, ushered in multi-party democracy ending three decades of monarchial one-party Panchayat rule.

The people’s movement of 2006 led the seven mainstream political parties and the armed CPN (Maoist) against the autocratic rule of Gyanendra Shah came to be known as the second people’s movement. “We do not know what he wanted to say but this is not a political language that one expects,” Dev Gurung, a former colleague of Thapa, who is now with the Dahal faction, said. “As the home minister, he should speak political language but when the fall is near, people use such language.” As Thapa is known to speak little in public and is considered introverted, it was all the more reason for those who know him to be surprised at his outburst.

“His statement as home minister is very disgraceful,” another former Maoist leader from the Dahal-Nepal faction said on condition of anonymity. Janardan Sharma, a former home minister and long-time colleague of Thapa’s during the ‘people’s war’, said Thapa’s “third people’s movement” announcement did not even deserve to be commented on. “What should I say for such a nonsense statement?” Sharma said. “I could not get the meaning of what he wanted to indicate.” Some security experts say that individuals like home minister should not speak the language of threat: otherwise, there will be no differences between the home ministers of the Panchayat era and now.

“The home minister should speak the language of rule of law, should remind the people what is written in the law,” former deputy inspector general of Nepal Police Hemanta Malla said. “A person holding such a sensitive post should not speak the language of threat. The home minister should tell what the law says if anyone is going to break the rule and should sensitise them accordingly.” Security agencies deal with issues related to law and order, Malla said. Sharma, a former Maoist commander, was even more scathing in his reaction to Thapa’s announcement of a ‘third people’s movement’.

“He must have forgotten what revolt and agitation is. I want to remind him. Morally speaking, how can he lead the revolt now! He is now part of regression and is now giving us a lecture on another round of revolt and revolution,” said Sharma. “This is pathetic. He must be pleasing Oli by speaking such nonsense. But if he does not speak like that, how can he secure his position in the Oli camp?” Long-time Oli ally Pradeep Gyawali, the foreign minister, however, was diplomatic when asked to comment on his Cabinet colleague’s outburst. “He [Thapa] has his own style of speaking so I do not want to make comments on his statements,” Gyawali said. “Since we have a strong people’s mandate, that is why he was referring to another people’s movement.”

As for his statement on locking up agitators inside the zoo, Gyawali said that it was due to Thapa’s old schooling [from the days he was an armed fighter]. But observers are, nonetheless, shocked by what Thapa said on Friday in front of Narayanhiti Palace. “The home minister’s statement or warning is not law,” said Malla. “He is inviting a very serious confrontation. This is a provocation. People sitting in responsible positions should be aware of this fact.” 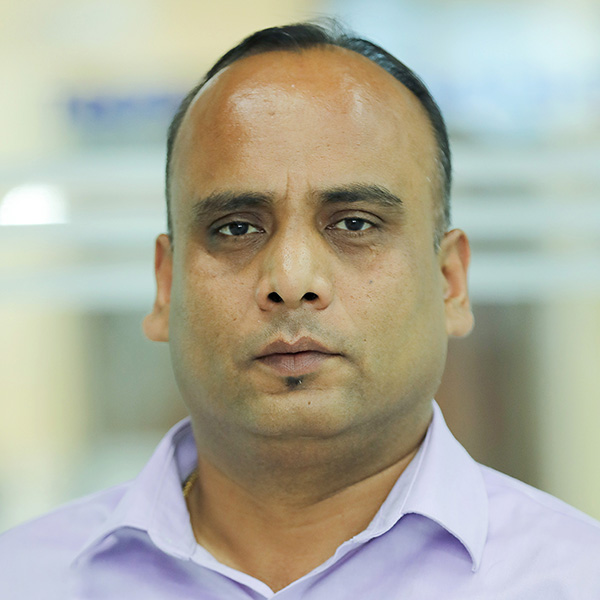 Anil Giri is a reporter covering diplomacy, international relations and national politics for The Kathmandu Post. Giri has been working as a journalist for a decade-and-a-half, contributing to numerous national and international media outlets. https://tkpo.st/2N4igdF